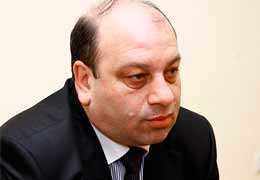 Armenian MP from Orinats Yerkir Party Hovhannes Margaryan urged the Government on Wednesday to restore wealth tax for the owners of cars worth more than 25mln AMD and houses worth over 200mln AMD and to spend the receipts on social projects.

The MP said that he has discussed the possibility with some car owners and they are ready to pay the tax.

They in the tax service had told Margaryan that officially there is just one person owning a house worth more than 200mln AMD but he is sure that in each city there are at least 10 such money-bags.

Armenia's Territorial Administration Minister Armen Yeritsyan said that only 16 people own expensive houses in Armenia with 57 people living there.

The wealth tax was cancelled a few months ago after the appointment of Hovik Abrahamyan was Prime Minister. The ruling party explained that the tax was inefficient and prevented growth in car imports into Armenia.