View from Brussels: Unlike Poland, President of Belarus has managed to strengthen his positions in Ukraine due to effective mediation 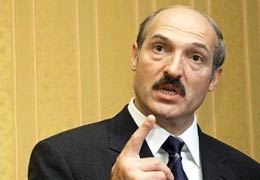 Unlike Poland, President of Belarus Alexander Lukashenko has managed to strengthen his positions in Ukraine due to effective mediation in the local conflict, Mateusz Piskorski, Director of the European Center of Geopolitical Analysis, told ArmInfo on Monday.

He said that from the very beginning they in Kyiv regarded Lukashenko as a non-alternative mediator in their possible dialogue with the Kremlin. They in Moscow were of the same opinion. And Lukashenko has made best of this situation. As a result, he has substantially improved his image in the eyes of both Russia and the West.

According to Piskorski, the Minsk Agreement has so far been the only effective agreement on Ukraine, and this is seen by many as Lukashenko's success.

Piskorski believes that the Byelorussian President will try to remain the only mediator on Ukraine as Poland has already missed this chance due to its harsh anti-Russian rhetoric.

According to the Polish expert, the key EU force, Germany, is no longer willing to see the Poles as mediators in the EU's eastern policy as they are more interested in harming Russia than in achieving peace in Ukraine.