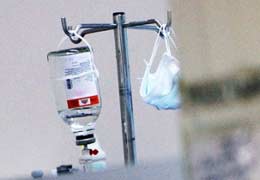 It is not clear yet when Aram Manukyan, MP from the opposition Armenian National Congress Faction, will be discharged from hospital, Manukyan's son Aren has told ArmInfo's correspondent.

Aren says that Manukyan's health condition remains unchanged and that he will stay in hospital for a few days. "He is undergoing relevant treatment", Aren said.

To recall, Aram Manukyan was attacked at about 8:12pm on Dec 11 by an unknown man, who struck him on the face several times and escaped. Manukyan was taken to hospital with brain commotion.

ANC members link the incident with the political activity of Manukyan. ANC Faction Head Levon Zurabyan told ArmInfo the attack on Manukyan was a regular incident in the chain of attacks on veterans of the Artsakh War Suren Sargsyan, Manvel Yeghiazaryan and Razmik Petrosyan. "Serzh Sargsyan and his team are behind the attack. The law enforcement must inquire into it immediately," Zurabyan said.