Iranian expert: Since settlement of global issues, Iran is going to become active in the South Caucasus 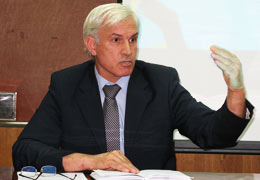 "Strengthening of Iran's positions in the region is stemming from the fact that our country needs the South Caucasus. In the geo-political context, the region is very much important for Iran especially in the context of energy resources transit. In this context, correction of the foreign policy of Iran regarding the South Caucasus region after the victory of Hassan Rouhani at the presidential election is vitally necessary", - the expert said.

For his part, Director of Institute for Strategic Studies of Middle East, Kayan Barzegar, said that Russia, Turkey and Iran are involved in the South Caucasus region as a necessary factor for its development. Iranian expert is confident that such cooperation will lead to resolving of the key problems not only of the South Caucasus but the Middle East in general. He also added that the detailed balancing is necessary in this matter. He also emphasized that it is impossible to ignore regional influence of the USA, European Union and Saudi Arabia.