Central Bank of Armenia reduces refinancing rate from 8% to 7.75% 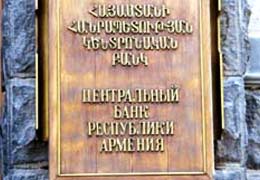 The Central Bank of Armenia (CBA) has reduced the refinancing rate from 8% to 7.75%. The CBA press service has told ArmInfo that the decision was taken during the CBA Council's meeting on Dec 24.

The CBA says that in November 2013 inflation made up 0.9% (versus 1.4% in Nov 2012). The annual inflation kept dropping and reached 6.6% in late November 2013. The CBA Council expects the 12-month inflation to be close to the upper threshold of the permissible range by late 2013. The CBA Council thinks that amid the expected economic development the annual inflation will keep dropping and will reach 4% within the next few months.
The CBA Council states that the growth rates of global economy are still recovering slowly and that one should not expect any inflationary pressure in the international markets of food and raw materials.

The source says that Armenia maintains slow economic growth rates despite the process of expansion of the fiscal policy in Q4 due to the current investment environment and slowdown in growth rates of private consumption. Given the situation in the global and domestic economy, as well as the expected inflation reduction, the CBA thinks it expedient to continue dampening the monetary conditions. In the meantime, further changes in the CBA's monetary policy will be dictated by the Armenian Government's fiscal policy for 2014.
To note, on November 12, 2013, the refinancing rate dropped from 8.5% to 8%. On the same day the deposit rates dropped from 7% to 6.5%, and the