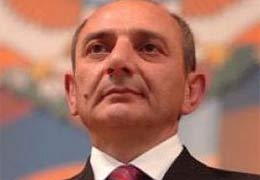 On 29 September Nagorno-Karabakh Republic President Bako Sahakyan sent a congratulatory address to President of the Republic of Abkhazia Alexander Ankvab.

The Central Information Department of the Office of the NKR President quotes Sahakyan as saying:

"On behalf of the Artsakh Republic people, authorities and personally I cordially congratulate you and the whole people of fraternal Abkhazia on the 20th anniversary of victory in the Patriotic War of 1992-1993.

The patriotism of the people of Abkhazia, having defended the freedom and independence, dignity and honor of their country, is a vivid manifestation of heroism and selflessness.

The best sons of Abkhazia sacrificed their lives for this great victory. Everlasting glory and honor to all the perished heroes!

Today, continuing the work of their brothers and fathers, the citizens of Abkhazia look into their future confidently, develop their country, reliably provide security for it and strengthen its independent statehood.
I congratulate you once more, respected Mr Ankvab, and the whole people of the Republic of Abkhazia with this memorable holiday.  Peace and prosperity to the fraternal Abkhazia!"