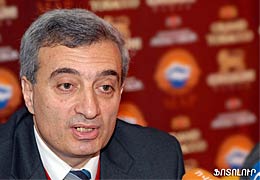 The national security interests make
Armenia demand reparations for the Genocide committed in Western Armenia by
Turks, Prof. Ashot Melkonyan, Head of the Institute of History of the Armenian
National Academy of Sciences, said at today's seminar held at the Armenian
Center for National and International Studies.

"The national security interests make
Armenia demand reparations for the Genocide committed in Western Armenia by
Turks. There is no adventurism here, because Armenia's national security will
not be enhanced by Turks' recognition of the Armenian Genocide only. The
Genocide slaughtered 1.5 mln Armenians and expelled the survivors from their
historical Motherland - Western Armenia. This has not been reflected in a
single document of international law so far", he said.

The historian pointed out that the
Armenian Genocide caused a number of political and legal problems, which still
remain unresolved.  The Holocaust has
been recognized by the world and the Jewish nation has received the relevant
reparations from Germany. The Muslims of Kosovo have received an independent
state in the very heart of Serbia because they were persecuted on ethnic
grounds. Meanwhile, Melkonyan pointed out that the Armenians of Western Armenia
were not only slaughtered, but also deported from their Motherland and
scattered all over the world. However, they have received nothing from the
Turkish Republic - the assignees of the Turkish Empire.

"This is why we should demand that
Turkey should not only recognize the fact of the Genocide, but also condemn it
and compensate for it.  Today it is
necessary to work out a relevant legal package aimed at restoring the
historical justice", he said.

The year 2015 will mark the 100th mourning
anniversary of the Armenian Genocide in Western Armenia in 1915-1923, which
annihilated 1.5 mln Armenians. Official Ankara keeps denying the Armenian
Genocide though 44 out of the 51 states of the USA and 24 countries have
already recognized and condemned it.
Turkey and Armenia lack diplomatic relations. The 330 km border between
the two countries has been blocked since 1993 on Ankara's initiative.