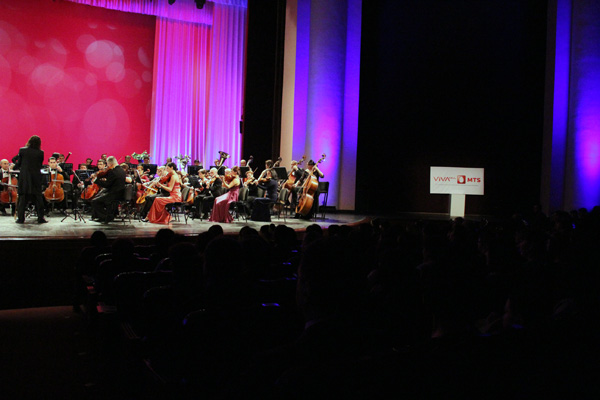 On the
occasion of the coming holidays a concert took place in the National Academic
State Opera and Ballet Theatre after A.
Spendiaryan that summed up the results of the cooperation between
VivaCell-MTS and the Opera Support Fund during 2014, the press service of
VivaCell-MTS has told ArmInfo.

The Symphonic Orchestra of the Opera Theatre (artistic
director and conductor Karen Durgaryan, who is also the founder of the Fund and
the President of the Board of Trustees), soloists, as well as the special guest
- famous Germany-based singer Hrachuhi Bazents performed works of Joseph
Strauss, Johann Strauss, F. Suppe, F.  Lehar,
E. Kalman at the "Vienna Gala" concert.

Owing to AMD 24 million of support from VivaCell-MTS,
the Opera Support Fund has organized 28 events throughout 2014, considerably
enriching the cultural life in the capital as well as in the regions of
Armenia.

"Opera is a national value. Armenian opera is a
cradle of talented, internationally acclaimed performers, whose world-known
names fill our hearts with pride. VivaCell-MTS spares no effort to support the
further development of the opera theatre. We want to provide the conditions
that our artists need for conquering heights, for maintaining their important
place on the international artistic stage and for creating vivid characters,
thus enriching the repertoire of the opera theatre with their impressive and
unforgettable performances", noted VivaCell-MTS General Manager Ralph
Yirikian.

VivaCell-MTS (K-Telecom CJSC) is Armenia's leading
telecommunications operator, having the widest 2G/3.75G/4G network reach and
spreading a wide range of Voice and Data services all across Armenia. Having
the best of the Armenian people interest at heart since its launch on 1st July
2005 and in a short period of time VivaCell-MTS has managed to build a
nationwide network and a considerable customer base.  VivaCell-MTS drives innovation and aims at always being at the
forefront of any development serving the Armenian mobile communications
market.  The company follows the
guidance provided by ISO 26000 (International Standard of Social
Responsibility).

Mobile TeleSystems OJSC ("MTS") is the
leading telecommunications group in Russia and the CIS, offering mobile and
fixed voice, broadband, pay TV as well as content and entertainment services in
one of the world's fastest growing regions. Including its subsidiaries, the
Group services over 100 million mobile subscribers.  The Group has been awarded GSM licenses in Russia, Ukraine,
Turkmenistan, Armenia and Belarus, a region that boasts a total population of
more than 200 million. Since June 2000, MTS' Level 3 ADRs have been listed on
the New York Stock Exchange (ticker symbol MBT).