Analyst: Levon Ter-Petrosyan is a politician from the past, and one should not follow his sad analysis 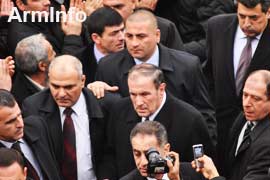 Levon Ter-Petrosyan is a politician from the past, and one should not follow his sad analysis, Regional Studies Center Director, political analyst Richard Giragosian said at a press conference on 24 December.

As a politician, Ter-Pertrosyan's political career is over, he said and added that if we look at the latest pro-Russian statements by Ter-Petrosyan, they clearly differs from the policy they conducted years ago. This means that the Armenian community should pay less attention to the former presidents of Armenia, the analyst said.

To recall, the leader of the Armenian National Congress party, first President of Armenia Levon Ter-Petrosyan has explained why there can be no Euromaidan in Armenia. The key reason why Armenia's refusal to sign an association agreement with the European Union did not result in public disorders is that in Armenia people are not as anti-Russian as in Ukraine.  "Unlike Moldova, Georgia and Azerbaijan, Armenia avoided becoming anti- Russian after the collapse of the Soviet Union and this exactly helped us to preserve our territorial integrity and to liberate Nagorno- Karabakh," Ter-Petrosyan said.  One more reason, according to Ter-Petrosyan, is that in Armenia people are disappointed with the West and its double standards. He believes that Armenia needs its own Maidan.