Tigran Sargsyan: Motor third party liability insurance was also opposed at first, but everyone realized the necessity of it in a couple of years 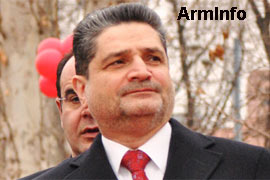 The accumulative pension system has been developed in Armenia for 10 years with help of the best specialists and through numerous discussions, Prime Minister Tigran Sargsyan told reporters in Dilijan, Friday.

He said that the opinion of the opposition was taken into account when developing the system and a relevant strategy.
"We want to promote the system in line with the requirements of the Parliament-adopted laws. We will be consistent in the reforms and will bring them to their logical end," Tigran Sargsyan said, the Government press-service reported.

The prime minister recalled introduction of the motor third-party liabilities insurance (MTPL) that was also opposed by the citizens, but everyone realized the necessity of it in a couple of years.  Jose Pinera, Co-chairman of Cato's Project on Social Security Privatization, Founder and President of the International Center for Pension Reform, has greatly contributed to development of the system. The given system was successfully applied in Chile. Earlier, ArmInfo reported that a group was created on Facebook demanding parliamentarians to respect their rights of choice and do not apply the law violating the social rights of a citizen of Armenia.

To recall, the voluntary accumulative pension system was introduced in Armenia on Jan 1 2011. The system will become compulsory starting Jan 1 2014. According to the bill, the minimal pension in the country will be equal to the minimum wage, while the basic pension will total 150% of the minimum wage.  The compulsory accumulative pension system will apply to the citizens born after Jan 1 1974 (the citizens below 40). Starting Jan 1 2014, 5% of their salaries will be transferred to their personal accumulative accounts. The government will transfer a similar amount (but no more than 25,000 drams). It is noteworthy that 6.6%-13% and not 5% of the monthly wages will be charged, as the charges will be made from the so-called "brutto-salary."  On 15 November the Republican Party boycotted the extraordinary meeting of the Parliament over the issue. Later on 21 November, an action of protest was held in front of the Government against the pension reform.