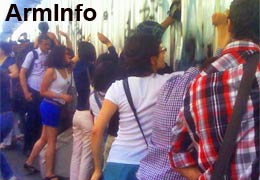 Over 200 activists of the "SOS! Save Afrikyans' Club Building!" public interest group are holding a protest action against dismantling of the building.

ArmInfo's correspondent reports from the scene that the activists are chanting "We won't let you destroy!" and despite the Police's resistance the activists are hitting the iron shields the building is fenced by. The tension is escalating with every passing hour, the police have joined hands and are trying to make a wall in front of the building. The activists are drumming and preparing for retaliatory measures. The situation is developing into clashes.

The Afrikyan building, located on 11 Teryan Street, was built at the end of the 19th century.  Based on a Government decision in 2004, the building was included in the state list of historical and cultural immovable monuments of the city of Yerevan as a national monument. According to a new Government decision the Afrikyan building will be dismantled and rebuilt at another location in order to broaden the roadway. The building is included in the "Old Yerevan" program, which will be designed and implemented in the neighboring streets of Abovyan, Byuzand, Koghbatsi and Aram.

The activists reported earlier that the Armenian Parliament ratified the European Convention on the Protection of the Archaeological Heritage. According to the Convention, each of the parties shall ban the full or partial relocation of the protected monument except when this step is made for the protection of the monument.

In early XX century, before the revolution, the Afrikyans' building was an urban club visited by well- known politicians, entrepreneurs, artists and foreign guests. In 2004 the building was sold to a private company by the Municipality. Industrialists Arakel and Tigran Afrikyan allocated big funds for schools and for road construction. Moreover, they built a water pipeline in Yerevan, which supplied the residents of Yerevan with drinking water.