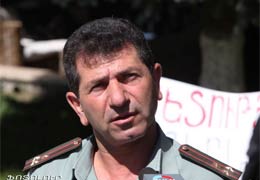 The prosecutor of the Administrative Court of Arabkir and Kanaker-Zeytun communities of Yerevan demanded that the Court should sentence Karabakh war veteran Volodya Avetisyan to 6.5 years in prison and confiscate $2000 from him. Volodya Avetisyan himself did not confess his guilt. "All this is fabricated, I have been repeatedly warned that I would be arrested if I continued my actions of protest:, he said.

To note, Nagorno-Karabakh war veteran Volodya Avetisyan was arrested on Sept 19, 2013 on charge of fraud. On September 20, 2014 the Defense Ministry claimed that he had taken $2,000 from some Zakaryan against promise to help his grandson to dodge the draft. Before that Avetisyan was holding a sit down strike to demand better life for Nagorno-Karabakh war veterans. Avetisyan is sure that his arrest was the authorities' response to his action.