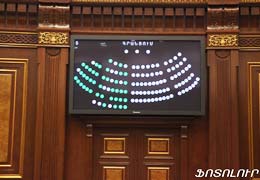 The Counting Board of the Armenian Parliament has declared invalid the results of voting on ratification of the "gas agreements" by 4 votes "pro". To note, the Counting Board consists of 7 members.

ArmInfo's correspondent reports from the Parliament that the opposition members of the Counting Board are Tigran Urikhanyan (Prosperous Armenia Party), Lyudmila Sargsyan (Armenian National Congress), Artsvik Minasyan (ARF Dashnaktsutyun) and Tevan Poghosyan (Heritage). They convened an extraordinary meeting of the Board to consider the legitimacy of the Dec 23 voting results.

To note, before the Dec 23 voting on ratification of the "gas agreements" Heritage MP Zaruhi Postanyan stole the registration cards of the MPs of the ruling Republican Party of Armenia. Speaker of Armenian Parliament Hovik Abrahamyan suggested that the parliamentarians should vote by raising their hands.
At today's meeting of the Counting Board, ARFD member Artsvik Minasyan said that the decision on open manual voting and vote counting was taken without the knowledge of the Board. It was done only at the initiative of Sukias Avetisyan, the head of the Board and an RPA member.
However, according to the Law on Regulations of the National Assembly, the decision shall be taken by the majority of the Counting Board's votes. Consequently, the open voting procedure itself and the counting of votes are invalid.

Lyudmila Sargsyan (Armenian National Congress) said that Sukias Avetisyan, the head of the Board, abused his office and should therefore be replaced. As a result, Lyudmila Sargsyan was elected head of the Board by 4 votes "pro". Ishkhan Khachatryan (Orinats Yerkir Party) was elected secretary of the Board.  Khachatryan was absent from the meeting but the Board members are going to inform him of his new position.
Tigran Urikhanyan (Prosperous Armenia) recalled that 4 political forces are going to apply to the Constitutional Court to declare the voting on ratification of the "gas agreements" invalid. Artsvik Minasyan, in turn, added that the parliamentary opposition is going to request the Government to clarify a number of unclear issues, particularly, the issue of the accumulated debt, as well as the controversial statements of the Government members about the "gas deals" and the situation around them.