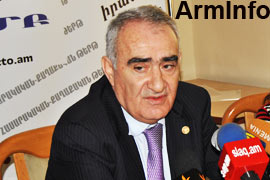 "Having come into power with just slippers on their feet, they very quickly got rich at the expense of the country and now they are trying to shift responsibility onto people like Margaryan," Sahakyan said.

He said that the huge incomes declared by the mayor are the result of his hard work. "He did not mention the sources because they are not registered to his name but he specified how much he has earned from those businesses," Sahakyan said.

The opposition's charge followed Margaryan's property declaration saying that he has a capital of $6mln though his monthly wage is just 130,000 AMD.