Russian expert: The agreement of superpowers on Syria and Iran has stimulated Turkish foreign political intellect to take new initiatives 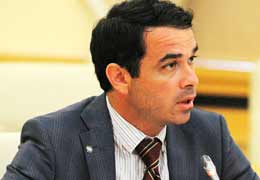 It is difficult to speak about Turkey as a country that loses something. By the 100th anniversary of creation of the Turkish Republic, this state is intended to enter the ten of the most developed countries of the world in the economic and geo-political sense, Russia political expert, Artur Atayev, told Arminfo correspondent in an on:line interview.

"As for the fact that Turkey lost guiding of processes in the Middle East, the events in Syria showed that Turkey cannot make up its mind to losing of such a status. Syria's Ambassador to Russia Riad Haldad pointed at destructive Turkish influence in Syria which in fact has remained the only ally of Russia in the region", - he said. In this context, Atayev thinks that the Geneva agreements of the superpowers did not at all put an end to the attempts of Turkey. "On the contrary. they have stimulated Turkish foreign political intellect to take new initiatives, which we shall learn about in the near future", - the expert emphasized.
When commenting on changing of the situation around Iran for the last months, Atayev said that if this country from America's No 1 enemy turns into a rather loyal country, it will have the best effect upon the South Caucasus countries. In that case, the USA will not take these countries like a transit zone in case of the true  military operation against Iran.