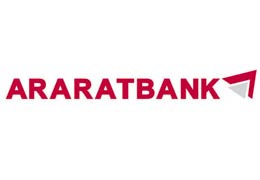 The press service of Araratbank reports that the loans will be issued at an interest of 10-12%. The maturity is 5 years, the maximum amount is $1mln. Eligible for the loans are companies with assets no more than $15mln and staffs of no more than 300 people.

"This is our first project with FMO but we hope to establish long-term mutually beneficial partnership and to enable our customers to borrow longer-term loans upon better terms," Araratbank's CEO Ashot Osipyan said while singing the deal with FMO.

The Netherlands Development Finance Company (FMO), called Nederlandse Financierings-Maatschappij voor Ontwikkelingslanden N.V. in Dutch, is a bilateral private-sector development bank based in the Hague, the Netherlands. It is licensed as a bank, under the supervision of the Dutch Central Bank. FMO was created in 1970 by the Dutch Government, commercial banks, the national employers' association, labor unions, and private investors to make investments in private sector projects in developing countries and emerging markets. In March 2008, FMO achieved bank status; the bank is officially under the supervision of the Dutch Central Bank (DNB). As of December 2009, FMO was present as a development finance partner in over eighty different developing countries and emerging markets.

According to ArmInfo's Financial Rating of Banks of Armenia, in assets and loans Araratbank is in top 10, in net profit in top 5. As of July 1 2014 the bank's assets totaled $286mln, of which 54% were loans. As many as 75% of all of the bank's loans are given to economy. The bank's capital totaled $53mln. In Jan-June 2014 Araratbank registered a net profit of $5.2mln (30% more than a year before).  The majority shareholders of Araratbank are Flash (64.24%), EBRD 25%+1, Rural Impulse Fund II (part of Belgian Incofin Investment Management - Incofin IM, 10%).