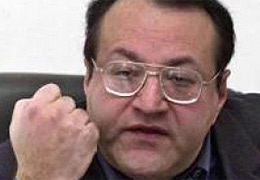 To note, at the Moscow Session of Eurasian Economic Council on 24 December Nazarbayev said his country is ready to sign the "road map" on Armenia's joining the Customs Union but with special opinion as it requires to explain the problem about the borders of the Customs Union because of the Karabakh conflict.

Hovhannisyan thinks that Nazarbayev's objections are unacceptable. He thinks that it is necessary to work out a single stance within the Customs Union. "We know that besides Nagorno-Karabakh, there are other non-recognized or partly recognized formations - Transnistria, Abkhazia, South Ossetia. And if there are no customs obstacles in the way of their full integration into the Common Economic Space, it is not clear why there may be any objections related to Karabakh and its full participation in the Common Economic Space.  Artsakh has established itself as a state, it has elected authorities and can hope to enjoy the same standards", says Hovhannisyan. "Why doesn't Kazakhstan, which has failed to recognize Abkhazia and South Ossetia, advance any claims against them?" Hovhannisyan wonders.

He recalls that Armenia is the guarantor of the NKR's security, including the NKR's economic security, and it is mentioned in the national security concept of Armenia. According to Hovhannisyan, earlier Russian Vice Premier, Russian President's Representative to Transnistria Dmitry Rogozin unequivocally said that Transnistria will join the Common Economic Space if Moldova signs an Association Agreement with the European Union. "A question arises. Will Armenia, which has failed to sign the Association Agreement and has chosen the Customs Union, lose the NKR?! The situation is rather absurd", Hovhannisyan says. He supposes that the President of Kazakhstan made an attempt to please Ilham Aliyev.

In this context, Hovhannisyan considers the stance of the Byelorussian President to be more grounded. Earlier, when asked by ArmInfo, Lukashenko did not rule out possible provision of a special status to non-recognized or partly recognized state formations within the Customs Union.

In the meantime, Hovhannisyan shares the opinion that each of the Customs Union members is trying to gain certain dividends from Moscow. "The Customs Union is not the USSR. Here the relations are very tough and meet the spirit of the 21st century, and each country is trying to get the most out of the offered formats of cooperation. There may be disputes and tough haggles.  Our authorities could have obtained essential benefits from these haggles if they had not ignored the public opinion. The authorities of Armenia are going blind. They deprive themselves of an important resource - the public opinion, which could have strengthened their stance during the negotiations. How has Yanukovich played the Maidan card?! He has preserved all the elements of Ukraine's sovereignty in the relations with Moscow and at the same time he has got the most out of it. Before the recent developments in Kyiv, the Russian authorities unanimously said that they were not going to help Ukraine if the latter failed to choose the Customs Union. But today Russia has decided to provide Ukraine with a 15 bln USD loan. So, Yanukovich has managed to receive immense financial support on no enslaving conditions (unlike Armenia's gas agreement with Russia, for instance). If the country's authorities ignore their own citizens, international partners and allies start ignoring these authorities", he says.