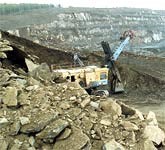 Meghradzor Gold Company reduced recovery of gold-bearing ore by 45.63% within 9 months of 2014 as compared to the same period of 2013 to 30,325 tons, the Ministry of Energy of Natural Resources of Armenia told ArmInfo.

The company is developing the Meghradzor gold deposit in the Kotayk region, Armenia.  It is one of Armenia's largest gold deposits in terms of its reserves (the 4th in succession) with estimated 22 tons of gold reserves. The recovered ore is processed at the dressing plant near Lusajur gold deposit in Kotayk region.  (The exchange rate of the Central Bank of Armenia for 15 December was 462.81 drams per 1 US dollar).

Meghradzor Gold LLC was founded in September 2010 by Vardan Margaryan.