Edward Nalbandian: Recognition, condemnation and prevention of genocide remains a priority for Armenia 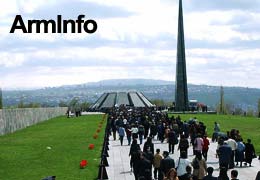 The recognition, condemnation and prevention of genocide remains a priority for Armenia and we will take necessary actions to prevent new occurrences of the crime of genocide, while keeping high on the agenda the issue of responsibility for the crime against humanity and its denial, said Foreign Minister of Armenia Edward Nalbandian at the General Debate Sixty- eighth session of the United Nations General Assembly in New York.

"This March, the Human Rights Council adopted by consensus a resolution "On Prevention of Genocide," initiated by Armenia and co-sponsored by over 60 countries," he recalled.

"As a nation that has survived the first genocide of the twentieth century, Armenia unequivocally welcomes the clear position adopted by the UN member states in precluding any possibility of immunity or pardon for perpetrators of crimes against humanity," the minister said.