Argishti Kiviryan refuses to give testimony and challenges the investigator 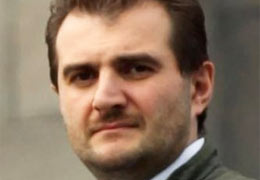 During the Aug 30 questioning at the Special Investigation Service of Armenia, ARMENIA Today Coordinator, civil activist Argishti Kiviryan refused to give any testimony and challenged the investigator. He pointed out that the Investigation Service did not let his lawyers be present at the question.

Earlier on Friday Kiviryan told the media that the Investigation Service considers him a witness, while the decision on institution of the criminal case mentions him as a person who has committed violence against the police. "They should have summoned me as the aggrieved party, but their goal is to summon me as a defendant", said Kiviryan.

To recall, Kiviryan was severely beaten Aug 24 evening during the action of protest against construction of a high-class apartment building in Komitas Street. Kiviryan says that he is ready to identify those who beat him. The information about the beating of Kiviryan and the relevant photos were posted on Facebook at midnight.  According to the information, the police hindered provision of emergency medical services to Kiviryan. A criminal case has been instituted under Article 316 of the Armenian Criminal Code (violence against officials).

Earlier this week Kiviryan told ArmInfo's correspondent that the criminal case had been instituted under an absolutely different "scenario". He is sure that that his detention, beating and the following processes were aimed at isolating him and causing an atmosphere of fear in the public. Kiviryan connects the police's actions with his journalistic and public activities.