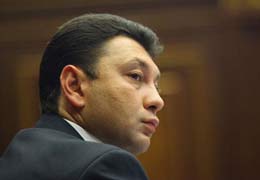 The press service of the National Assembly has told ArmInfo that in his opening speech Eduard Sharmazanov underlined the Armenian-Russian centuries-old friendship and noted that the relations between the two countries should further develop and deepen, and with this respect he has highlighted the parliamentarians' role. He noted that the political and strategic relations between the two countries are in the phase of stable development. Mr Sharmazanov assessed the coordinated work of the delegations of the two countries in the international parliamentary structures.

Touching upon the NK conflict, Eduard Sharmazanov positively assessed the role of Russia, as a Minsk Group Co-Chair country, aimed at the peaceful settlement of the problem.
Talking about the problem of the international recognition of the Armenian Genocide, Mr Sharmazanov thanked the Russian authorities for passing the law on recognition of the Armenian Genocide already in the 90-s.

Eduard Sharmazanov also referred to the processes of Armenia's accession to the Eurasian Economic Union (EEU). He highlighted the reinforcement and further deepening of cooperation of the Republican Armenian and Yedinaya Rossiya parties.

Mikhail Krotov noted that the goal of their visit is to discuss the concrete format and the ways of cooperation at the level of parliamentary factions. Mr Krotov noted that Armenia, joining the EEU, will become a full member of the Union.
Oleg Lebedev highly assessed the level of bilateral relations and emphasized the rapprochement and expansion of cooperation between the Republican Armenian and Yedinaya Rossiya parties.

In the course of the meeting other issues were also discussed.