Armenian PM: There can be no customs points between Armenia and Nagorno-Karabakh 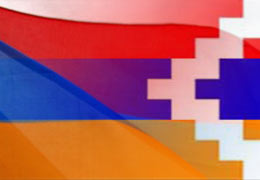 "The Armenian President gave a clear answer to President Nazarbayev. He said that there can be no customs points between Armenia and Nagorno- Karabakh. And despite Nazarbayev's statement, all the Customs Union presidents approved the road map. The Nagorno-Karabakh problem was never mentioned when we were joining the WTO or negotiating the deep and comprehensive free trade area with the EU or signing the free trade agreement with the CIS. The Customs Union will not be an exception," Sargsyan said.

He said that the agreement on Armenia's accession to the Customs Union will be ready by May 2014. "If we come to terms on all moot points, in June 2014 the agreement will be submitted for the ratification of the four member parliaments," Sargsyan said.