Raffi Hovannisian to stop his hunger strike on Easter 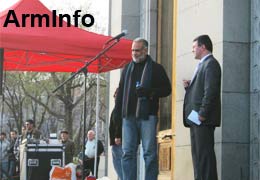 Raffi Hovannisian will stop his hunger strike on Easter Mar 31. After that he will start a tour of Armenia.

During a rally on Friday he said that this will not be the end of his struggle - it will continue till Apr 9. "Before that we will be touring across Armenia and recruiting people who will take power," Hovannisian said.

He said that he is not afraid of governor of Syunik region Suren Khachatryan, who said that "his head may be broken with stones as it must be done with snakes," and invited him to a "duel" at Kapan's central square.

A group of green activists joined the protesters during the rally. They climbed on Alexander Spendiaryan's monument. The police asked them to come down but they refused. The crowd showed displeasure, but Hovannisian interfered and the activists came down.