Ruben Vardanyan: We speak of confidence as of the key competitive advantage 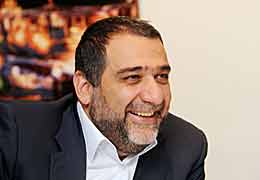 "Many think that Vardanyan has sold his company and is now engaged in charity. It is not so. I am going to provide services in investments projects and in charitable projects to customers who will consolidate around me and get commercial benefits, high quality services and feel themselves involved in interesting, bright and large-scale charity projects," said Ruben Vardanyan,  Russian businessman, investor, philanthropist, advisor to the Russian Sberbank President, in an interview with Vedomosti newspaper, Tuesday.

Speaking of projects related to the charity industry creation in Russia, educational initiatives in CIS and development of Armenia, Vardanyan called it important for such projects to be financially sound. "We try to build models to make these projects less dependent on donors. We also try to abandon the formula 'I do not receive much money that is why I work as much as I can.' Therefore, we work to motivate people to work on our projects. This is also based on confidence as the key competitive advantage.  People trust me, as they see that I do not just collect money, I invest my own money as well. I have a range of successfully implemented projects and people see and understand  how this is done: all the raised money is invested in a particular project, not a penny is directed to operating expenses, money is not stolen and, what is the most important, the project is implemented on the principle of collective leadership,"  Vardanyan said. According to him, he undertakes very big responsibilities and risks: "Today I do the same as I did before but more systematically and purposefully." Vardanyan said a structure is currently being formed to bring all his projects to a single platform.

To recall, the Foundation headed by Ruben Vardanyan and his spouse Veronika Zonabend is implementing in range of projects in Armenia. One of the most large- scale projects they have funded is the Tatev Monastery project that implies restoration of the complex and development of the local tourism industry.  Under this project the world's longest ropeway (cost $45 million) was built in the area of the Monastery.  Another big project is the United World Colleges (UWC International) Dilijan International School (DIS) (cost $120 million).