Lebanese analyst: Only regional cooperation can guarantee development to Armenia, Georgia and Azerbaijan 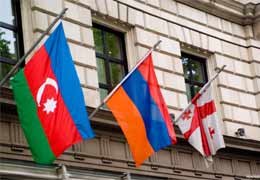 Regional cooperation rather than individual support of one or another great power can guarantee development to Armenia, Georgia and Azerbaijan, Director of Abdel-Halim Fadlallah, Director of Beirut's Center for Strategic Studies, said at the Security and Cooperation in the South Caucasus international conference in Yerevan on Wednesday.

Fadlallah believes that the South Caucasus and the Middle East have a lot in common and that in their relations with the West both must act as a whole - for a concession by one country can affect all the others.  The natural and human resources and the geographical situation make both regions a titbit for great powers.
The conference has been organized by PolitContakt NGO (Russia) and Noravank science and education fund (Armenia) and will last till December 20. It will discuss prospects for creating regional security systems in the South Caucasus, Iran-Turkey relations amid the Syrian crisis, consequences of the Eurasian integration for greater Near East and the current status of Karabakh peace process and settlement prospects, as well as the economic integration of the South Caucasus states. Experts from Armenia, Russia, Lebanon, Iran, Azerbaijan and Georgia are taking part in the conference.