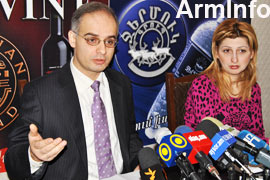 "Today we sent a letter to Armenia's Prosecutor General's office with a request to file a lawsuit against Margaryan under the article  - swindle. We ask law-enforcement agencies of Armenia to hold the relevant investigation and to bring Yerevan mayor to responsibility", - he said.

He also added that specific facts were submitted, based on income declarations presented by Margaryan in 2005, 2007 and 2013. In particular, according to the declaration, in 2005 being the head of Avan community of Yerevan, Margaryan earned about 7 million 400 thsd drams, but in 2007 he earned 54 mln drams, $50 thsd and bought jewelry for 80 mln drams, though his salary was 130 thsd drams (about $310). Moreover, in 2013 Margaryan declared his property at $6 mln, though actually his property exceeds $10 mln. In 2013 Margaryan earned 115 mln drams, $50 thsd and 50thsd EUR, several motor-cars, dozens of houses in Yerevan, etc, Zurabyan said. "So, thanks to simple mathematics and taking into consideration the fact that Margaryan had no extra revenues, one can say that the given funds were got by means of swindle", - Zurabyan said.

Zurabyan also pointed at numerous evidences of the fact that government procurement for provision of urban amenities were bought by several times more expensive than their market price. This means stealing of the Yerevan budget, Zurabyan said and added that ANC is under no illusion regarding Prosecutor General's office, but has applied to the office to show that the accusations against RPA members are not groundless.  "Now nobody can say that we do not have evidence. They were submitted to the Prosecutor General's office. And now it should present heavy rejoinder or take relevant measures regarding the criminal", - he said.

To note, "Barev Yerevan" bloc, initiated by the leader of the  Heritage party Raffi Hovannisian, has also applied to the Prosecutor General's office with a similar lawsuit.

During today's meeting of Taron Margaryan in Avan district of Yerevan journalists asked him to comment on the above mentioned lawsuit, and he recommended them to apply to his press-secretary Shushan Sardaryan with all the questions. However, all the attempts of Arminfo correspondent to get commentary on the issue from Sardaryan failed, as she did not answer calls.