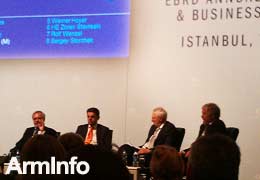 Macedonia, Kazakhstan,
Lithuania, Serbia, Ukraine,
Russia, Turkey and Israel
are the countries the innovation problems of the economic development of which were
in the center of attention of an international business forum within the frames
of a regular annual meeting of EBRD held in Istanbul on 10-11 May of the current year.

Unfortunately,
the forum did not touch upon Armenia
and its innovation ambitions though our country has always cast itself as a
country which had chosen the innovation way of development. It is no secret, that
unlike the mining industry this sphere is not connected with transport expenses
and does not depend on availability of the semi-blockade communication
conditions of our country’s existence. However, it is very much possible that foreign
innovation community is not yet ready to accept at its face value the pompous
statements that there is no alternative to the innovation way of our country’s
development. But this statement goes on serving a means for the local usage.

Incidentally,
during the talk about the problems of the innovation development of Eastern Europe
just Israel was serving like
a unique benchmark, though geographically it is located far from Europe. Many participants in the interesting discussion were
referring to Israel’s
experience. And director general of InterIsrael, Maxine Fassberg gave a worthy response
to his counterparts. “We are praying for oil, gas and other mineral deposits be
never found in Israel, as in that case it will be irresistible  not to fall down to the level of the
countries with only a resource-based economy, poor infrastructure  and with many accompanying problems”, - he
said. These words were voiced like the key and important warning to the
partners and governments which  hiding
behind a modern word “innovation”, nevertheless every day keep tab on the quote
of the world prices for hydrocarbons. Unfortunately, Armenia is among them, as it has
got only two key sources for the economic growth – cooper concentrate and
foreign transfers from the Armenian Diaspora.

Though it
seems strange, but Turkey
itself understands it very well. According to the official data, only for development
of the  high speed Internet the country allocates
up to $1 bln from its budget every year. As the head of  «TurkTelecomGroup» Hakam Kanafani said, development
of this sector depends not  only and not
so much on the number of the people which have the Internet access  as on the country’s investments in the scientific
and technical as well as engineering developments, and on the climate which the
country can create for occupation of a worthy place in the world innovation
chain. It is no secret that just Israel has managed to reach special success,
and unlike many countries of the world, Israel with its IT companies comes
forward not like an outsourcing  country
similar to Armenia, which has been implementing
small orders of foreign corporations, but like the smart set.  Here we have an effective and right schedule,
according to which just Israeli IT companies supported by the government
establish thousand of branches in many countries of the world, and globalize
its IT sphere in such a way, as they understand very well that the outsourcing
services have no prospect. The whole legislative field and all the regulative
functions of a state should be directed at creation of a maximally favorable
climate for innovations. Here the fragmentary approach is unacceptable and
useless. Only in the countries, which have no system in this sector, we see an
endless brain drain to the West. It is natural that they want to improve their
life quality and to ensure professional growth. For this reason, the countries
which draw special attention to development not only of the innovation but also
venture economy, finally win. Incidentally, in this case they do not rely on
assistance of international donors. Representatives of EBRD, the portfolio of
which has only 3% of bad credits,  said
at the forum  that the bank does not
welcome the financing of the venture, high risk projects by the shareholders of
international financial donors, though everybody understand their significance
for the economic development of the Eastern Europe.

But if
the innovation economy in our post-crisis period is the only hope for the stable
economic growth, in that case, how we can combine two factors – the resource expenses
to ensure growth and the regime of economizing financial funds. This problem was also discussed at the forum.
As the English say, “nothing is
impossible”. One should start just from creation of the most favorable work
regime for small companies, not to impose pressure upon them with a help of the
tax and customs administration, to ensure an equal competitive field for all
the economic entities, that is to say, to change the approach in Armenia and
Russia, though the latter manages “to come out” thanks to its big territory and
an endless demand for oil.  Incidentally,
participants in the forum advised Eastern European  countries to revise their foreign political
agenda towards joining the EU as am important component necessary for the
growth of the political stability, as if they do not have an example of Greece, Portugal,
Spain, Cyprus and Iceland. However, there is no doubt
that European standards of business, many all-European  economic directives, anti-corruption and
anti-damping measures and the steps for ensuring competitive field  may serve the best sample for many developing
countries.  A pension reform will not
pave the way to innovative economy for the small and medium-sized enterprises
if there is no competition. This undisputable thesis applies also to Armenia, where
reforms will fail without settlement of basic problems. Even the authoritarian
leaders, inherently dictators, of the countries known as ‘economic tigers’
started with fighting corruption at the grassroots, pressing shadow economy,
creating maximum fair competitive environment, facilitating SME access to bank
financing, creating transparent financial and corporate markets, which boosted
business activity, and only after, launched serious structural reforms. There
are two ways: Chilean and European. The first one was not mentioned at the
forum, indeed, as Pinochet and Lee Kuan Yew remained in the past and the history
cannot be reversed to a great despair of some of our high-ranking compatriots,
especially in conditions of intensive globalization and growing geo-strategic
battles.

The
European Business Forum in Istanbul, a big city
in the country, to put it mildly, unfriendly for Armenia, that strives for the top
ten of the biggest economies in the world, was a real success. At present, Turkey, and
first of all, Istanbul-Constantinople, is a developed city with 15 million
people, constantly growing population, Europe-oriented economy, and big
innovative potential. Unlike our fading away Armavia airline, Turkish Airlines
are the pride of Turkey’s
authorities. Due to the low tariffs and right positioning, the Turkish
authorities are going to make it a global brand. It is Turkish Airlines that
cherish the Turkish idea to create a regional and not just economic power. This
is another subject, however.