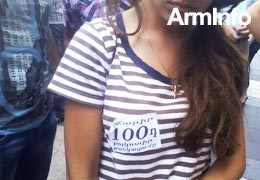 Armenian journalists have applied to Mayor of Yerevan Taron Margaryan. They demand that Margaryan should cancel the decision on public transport fare rise.  The statement has been signed by 73 journalists. They remind the mayor of the promise he gave in the run-up to elections in 2012. To recall, last year the mayor promised not to raise the transport fare.

The journalists say that the law regulating the transport sector stipulates fare rise only in case of AMD devaluation, growth in prices of fuel and lubricants, as well as growth in prices of spare parts and means of transport. The statement also says that settlement of the citizens' social problems is an integral part of the state structures' functions, and the Municipality's social security strategy aims to reduce the social risks and provide the citizens with real social guarantees. The mass media representatives remind Taron Margaryan of the Municipality's previous statement that the commission set up to revise the transport fare will approve reasonable tariffs. "The commission has not yet discussed any tariffs, but you and the deputy mayor have already announced during the meeting with the media that transport fare rise is inevitable>, the statement says. The journalists think that these and some other facts demonstrate that the commission is not inclined to set reasonable tariffs for the population.

"That being said, we demand giving up the unsubstantiated and illegal intentions to raise the transport fare and setting up a commission to find efficient managing mechanisms and solutions to the transport problems", says the statement.