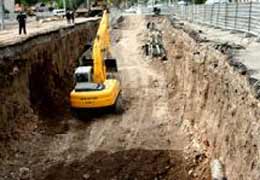 She said that over 3,000 fruit trees will be cut for the North-South highway. According to EcoLur, the Investment Program of Sustainable Urban Development (Tranche 1) provides for alienation of 114 lands with an area of 3 5258753 cu m. As a result, Artashat community will lose 81% of fruit trees, 38 buildings and constructions.

Zarafyan said that the given part of the program was not submitted to consideration of public organizations.  They learnt about it by a chance, Zarafyan said calling for cancellation of the positive resolution on the project.

Government of Armenia approved the investment program of the North-South transport corridor on Jan 14 2010 and a framework financial agreement between Armenia and ADB in the amount of 500 million dollars. The North-South 556km motorway will be laid via the Armenians towns of  Meghri-Kapan-Goris- Yerevan-Ashtarak-Gyumri-Bavra and enter the territory of Georgia on Akhaltsikhe-Batumi section, which will settle some transport problems of Armenia.  This will be a four-lane motorway of reinforced concrete extending from the Armenian border and Iran to the Georgian port Batumi. The road corridor will facilitate improving the road connection with the two neighbors of Armenia: Iran and Georgia, providing access to international trade routes and markets. Agarak-Kapan-Yerevan-Gyumri_Bavra road links the South of the country with the North providing access to "Southern Road Corridor" of Georgia which enables access to Poti and Batumi ports or to the East towards Tbilisi.  Due to the project, the overland communication Europe-Caucasus-Asia will be improved. The project will be completed by 2017. It will allow Armenia to soften the consequences of the blockade by Azerbaijan and Turkey and to join the Black Sea ring highway.