Thomas de Waal: What was possible between Sweden and Finland in the past century is impossible today between Armenia and Azerbaijan 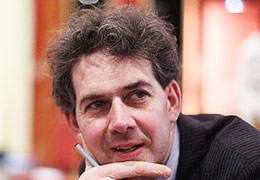 What is the
latest incident at the Naxivan border evidence of?  Even in 1991-94 this sector of the border was more or less quite. What has changed?

After losing the war, Azerbaijan now tries to use
skirmishes on the border to somehow exert pressure on Armenians.

In the
course of the 1991-1994 war, Nakhijevan was a true exception in the theater of
war. Heydar Aliyev did not want to war with Armenia. It was not within his
interests. Negotiations with Ashot  Manucharyan,
the air corridor via Armenia
for Aliyev's plane, show his special position and status. Many say that nothing
has changed since the indefinite truce between the parties
to the Nagorno Karabakh conflict, I am sure  that much has changed since them. One
fundamental change refers to the
conflicting parties. In the years of war, the conflict was between Karabakh and
Azerbaijan, as Yerevan officially
disclaimed its involvement in the military actions. Now, when Armenia and Azerbaijan have become full-fledged
states - with some shortcomings and reservations, indeed - there is a conflict,
though frozen, between these two countries.
This is a fact. In this light, skirmishes on the Armenian- Azerbaijani
border, on the border with Nakhijevan, look quite logical. At least, I am not
surprised.

What are
the possible goals of the skirmishes?

As for the
goals of the skirmishes on the Nakhijevani section of the border, I am familiar
with the topographic peculiarities
of the given part of the Armenian-Azerbaijani border. However, in the lighting
of the growing tension around the conflict,
the sides use and will be using every strategic advantage to occupy high
grounds. I am confident that  not only
such incidents
will continue on the Karabakh-Azerbaijan border but also on the
Armenia-Azerbaijan state border.

Which of
the parties to the conflict is more concerned about the process of  contribution to the tension?

The
Armenian party is not interested in such incidents, and much less in victims. Armenia
and Karabakh try to stabilize the situation as much as possible to maintain and
reinforce the status quo within the post-war borders. Meanwhile, Azerbaijan, as
a defeated party, tries to use that rare lever of pressure on Armenians. Such
skirmishes very often happen due to the local
specifics. Another matter that such frightening game may have very undesirable
scenario for both the parties to the conflict and the mediators.

Many say
that nothing has changed around Karabakh for the last 20 years.Meanwhile the geo-politics around
the conflict has radically
changed. The conflict around Ukraine,
Russia's
new role, deeper disagreements between the OSCE Minsk Group co-chair
states, etc. May all this lead to the new situation around the Karabakh
conflict settlement?

Certainly, worsening of relations between the
West and Russia
affects the Karabakh process as well as other processes within the frames of
which these force centers have been cooperating in a certain sense.  I would say that democratizing, dialogue and raising of
the role of civil society affect Karabakh most of all in the conceptual and
theoretical sense.  This is a more
European  approach. The
realpolitic approach is used regarding Karabakh. Of course, such an approach is  used by the western countries
too, but it is chiefly used by Russia
especially for the last years. And if Moscow
suddenly decides that the time has come to settle the Karabakh conflict, it
will be able to push the negotiating process, if it is in the interests of Russia.
However, I am not  confident that Moscow can affect the
Karabakh conflict settlement, especially in the matter of the terms of
settlement.

Certainly,
the key for the Karabakh conflict settlement is in the hands of presidents of Armenia and Azerbaijan. Nevertheless, external
aspects may also strongly affect the  parameters
of the Karabakh conflict settlement. And if the co-chairmen suddenly want very
much to push the peaceful settlement process, undoubtedly, they will be able to
do it. Certainly, this will cost something to them as well. For this reason,
the intermediaries have not made such a step yet. Perhaps, settlement of the
Karabakh conflict is not stemming  form
their interests yet. I mean not only Russia,
but the USA and France
too.

Today may
say about the necessity of participation of Stepanakert in the negotiating
process. Will that improve the prospects of the Karabakh conflict settlement?

I think
that at least at present Karabakh has nothing to say at the talks. And taking
into consideration the fact that today we have only one frame document on the
negotiating table coordinated with Stepanakert, in Karabakh they are well aware
about the content
of the given document, and they hardly have something to add. It is more
important for the Karabakh Armenians to participate in the negotiations the
time when the critical stage of the process starts.  I think that participation of the Karabakhi
Azerbaijanis in this process would not go amiss.

There
is  viewpoint in our countries that the
Karabakh conflict is used by the authorities for their regular reproduction and for taking
the eyes of the society from local problems. What do you think about it?

Of course,
there is a share of truth in it. The authorities of Armenia
as well as Azerbaijan
have been actively using the Karabakh factor in the interior policy. But this
is a two-edged sword. The conflict serves as a machinery of manipulation of the
authorities of both countries. It is actively used by external players, and
much limits the maneuvering potential of official
Yerevan and Baku. Just for this reason, not knowing what
will happen in future, the authorities of Armenia and Azerbaijan themselves do
not dare to break the present status-quo, he said. A sudden intention of Armenia to join
the Customs Union was also based on the relevant hint of the Russian partners.
Serzh Sargsyan's key task, as a president, is ensuring security of Armenia
and Karabakh. I think that in Moscow he was let
fall a hint that if Yerevan refuses the
"customs prospects", Russia
will be able to revise its role as a guarantor of Armenia's security.

How will
the Karabakh conflict be resolved? What do you think about it, like an expert?

I think it
would be non-productive to specifically speak today about peaceful settlement
of the Karabakh conflict.

The content
of the six Madrid
principles on the negotiating table is really reflecting all that which the
parties to the Karabakh conflict
may give and get today. In other words, these principles are more or less
drawing what is possible. I think that Scandinavian
model of settlement, based on partition of sovereignty, could be successfully
used in Karabakh. Unfortunately,  what
was possible in Europe between Sweden
and Finland  in the past century, is impossible today
between Armenia and Azerbaijan.
For this reason, they have to start from what is possible, first of all, from
creation of the trust atmosphere. I mean even not signing of the document but
formation of the trust necessary for its signing.