Gagik Makaryan: Armenian Government has no right to be an auditor of ArmRusgasprom CJSC 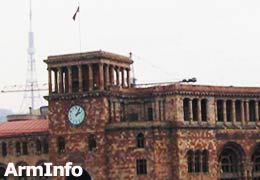 The Government of Armenia has no right to be an auditor of ArmRusgasprom and estimate the losses of the private company, Gagik Makaryan, Head of the Republican Union of Employers of Armenia, said at today's press conference in Yerevan when commenting on the gas deal with Gazprom.

Makaryan thinks that the Government has failed to give a reasonable answer to the question how ArmRusgasprom has accumulated a 300 mln USD debt to Gazprom. The Parliament has received no clear answers to this question, he said. "Armenian Minister of Energy and Natural Resources Armen Movsisyan was guided by diplomatic twists and turns rather than substantiated statements", the economist said.  Makaryan thinks that the lack of audit evidence in ArmRusgasprom over the past three years, as well as the lack of data of the customs and taxation services cast doubt on the fact of the debt. He added that ArmRusgaprom affords prohibitive expenses. "For instance, 60 thsd USD is spent on telephone conversations. In the meantime, despite the consumers' regular payments, the company keeps suffering losses for unknown reasons", said Makaryan.

During the Dec 23 extraordinary meeting, the Armenian Parliament ratified the Armenian-Russian agreement on the terms of the purchase-sale of ArmRusgasprom's shares and the company's further activities. 77 MPs voted pro, with no votes contra and no one abstained.

Energy and Natural Resources Minister Armen Movsisyan said that signed during President Putin's visit to Yerevan on Dec 2 2013, the agreement gives Armenia's last 20% stake in ArmRusgasprom to the Russian Gazprom so as the latter can supply gas for $189 per 1,000 c m.
According to the agreement, in 2014-2018 Armenia will receive 2.5bln c m a year against 1.7bln c m in 2012.