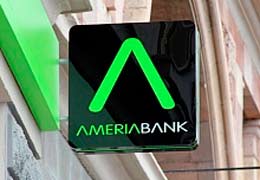 Ameriabank continues to successfully develop its retail banking business. This year the bank has appeared with new even more attractive retail services. As a result, in Jan-Aug 2014 it exceeded a number of targets, Ameriabank's Retail Banking Director Arman Barseghyan told journalists on Tuesday.

He said that the bank's clientele grew by almost 22%. The number of cards grew by 30%, while the volume of card transactions grew by 23%. Card loans grew by 38%, auto loans by 11%, mortgage loans by 8%, retail loans for SMEs by 65%, overdrafts for legal entities by 50%.  Call deposits grew by 37% to $41mln, time deposits by 23% to $188mln.
"In all key figures we have recorded high growth. As a result, we have become more competitive on the market," Barseghyan said.
When asked by ArmInfo about retail loans, he said that this year the bank is planning to increase them by 30% to more than $100mln, with 50% growths for priority segments, like consumer, card, auto and SME loans.