Vice Speaker of Armenian Parliament: Armenia will take no steps that may damage Nagorno-Karabakh's political and economic interests 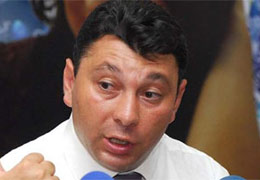 Armenia's accession to the Customs Union and the Eurasian Economic Union has nothing to do with the problems of borders, Vice Speaker of the Armenian Parliament Eduard Sharmazanov told ArmInfo, when asked to comment on the last statement by Kazakh President Nursultan Nazarbayev that Armenia must join the Eurasian Economic Union within the borders it had when joining the WTO.

"Armenia and Nagorno-Karabakh share one and the same economic area.  This is a fact. It's also a fact that Armenia will join the Eurasian Economic Union in June 2014. There are a number of problems we need to solve but they have nothing to do with the border. The Customs Union and the Eurasian Economic Union are not authorized to solve border- related problems. Armenia joined the WTO and is now joining the abovementioned unions to solve its economic problems rather than to settle the Nagorno-Karabakh conflict. The latter is the prerogative of the OSCE Minsk Group," Sharmazanov said.

He advised not to make a buzz about Nazarbayev's statement. "We perfectly know who he made it for and why," Sharmazanov said, noting that Armenia is the guarantor of Nagorno-Krabakh's security and will take no steps than may damage its political and economic interests.