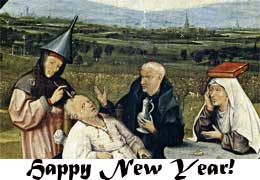 The leader of the parliamentary group of Heritage Party Zaruhi Postanjyan has prepared symbolic New Year postcards for the President, the Prime Minister, the Speaker of the Parliament and the Chairman of the Constitutional Court.

"The postcards have a deep meaning and I hope that the addressees will understand it. For example, the postcard for the Prime Minister pictures a lamb with tied legs. In his postcard the Speaker of the parliament will find a rooster hanged upside down. For the President I have prepared a postcard containing Hieronymus Bosch's The Cure of Folly painting. Those who have usurped power in Armenia regard their people as fools. That's what President Sargsyan thought of his people when trying to convince them that the Customs Union is good for them.  Chairman of the Constitutional Court Gagik Harutyunyan will receive a similar postcard as he is from the same KGB school as Mr. Sargsyan," Postanjyan said.