Old building of Zvartnots Airport may be demolished 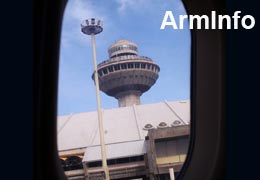 The concessionary of Zavarnots Airport, Armenia International Airports, wants to demolish the airport's old building.
"They say it is in a bad condition but it has a high architectural value as an example of Soviet modernism," President of the Union of Architects of Armenia Mkrtych Minasyan told journalists on Monday.  He said that Yerevan's Municipality is also against this plan. "They better repair it than pull it down," Minasyan said.
The building was constructed in 1980. In 2002 Zvartnots Airport was committed to trust of Armenia International Airports, a company owned by Argentinean businessman Eduardo Eurnekian.