Paruyr Hayrikyan: Armenia and Ukraine have a common "frenemy" in the person of Russia 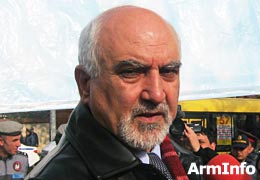 Armenia and Ukraine have got a common "frenemy" in the person of Russia, the head of the National Self-Determination Union, Paruyr Hayrikyan, said at today's press-conference.

He said that by using the armed separatists Russia has been trying to impose pressure upon Ukraine. Hayrikyan thinks that Russia will use Azerbaijan against Armenia. Therefore, Moscow has been actively selling armament to Azerbaijan, he said.

Hayrikyan is confident that Armenia should continue the way towards the European integration. In this context, he added that President of Armenia Serzh Sargsyan should tender his resignation, as his foreign policy has failed twice, and let other leaders develop the way to the European integration. " In Ukraine the president failed the foreign political course and tendered his resignation, but in Armenia everything has been developing in the unique Armenian way, and despite the failure, the president is still in the power". - the politician said.

He also added that Armenia cannot continue conducting the shameful policy "and:and". "The official Yerevan does not have a choice, as Russia is doomed, and Armenia should go the way of the European integration", - he concluded.