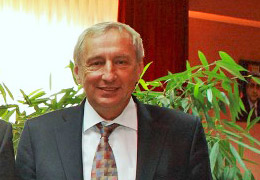 Armenian Foreign Minister Edward Nalbandyan met on Monday with Ambassador of Russia to Armenia Vyachelsav Kovalenko, who is completing his mission in the country.

The press service of Armenia's Foreign Ministry reports that Nalbandyan thanked Kovalenko for his active efforts to promote Armenian-Russian strategic relations and presented him with a commemorative medal.

Kovalenko said that he is proud to have contributed to the strengthening of Armenian-Russian ties and thanked Armenia's Foreign Ministry for supporting him throughout his mission.