Members of the European Parliament Visit the Tsitsernakaberd Memorial Complex 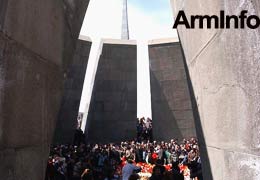 On April 30 the members of the delegation of the Conservatives and Reformists Group of the European Parliament visited Tsitsernakaberd Memorial Complex and laid flowers at the Memorial of the Armenian Genocide victims, honored the memory of one and a half million innocent victims with a minute of silence.

The Head of the delegation Martin Callanan left the following note in the Commemoration Book: "It's very important that all of us, the politicians do our best in order such thing will never happen. Those, who forget the history, are doomed of again making mistakes."

Sharing his impressions with the journalists Martin Callanan noted:  "Terrible events have taken place. It is important for modern policy that we will learn lessons from all this, what happened in the past not to be repeated."