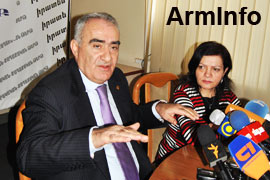 Armenia will join the Customs Union and the Karabakh problem will be no obstacle, Galust Sahakyan, Head of the Parliamentary Faction of the ruling Republican Party of Armenia (RPA), said at today's press conference.

Sahakyan thinks that one should go easy on the Dec 24 statement of Kazakh President Nursultan Nazarbayev given the relations between Astana and Baku and Kazakhstan's "certain stance" on the Karabakh problem. "We are aware of Astana's stance on the Karabakh conflict. So, I see nothing amazing in such statements", said Sahakyan.

To note, at the Moscow Session of the Supreme Eurasian Economic Council on 24 December Nazarbayev said his country is ready to sign the "road map" on Armenia's joining the Customs Union but it demands clarifying the problem of borders of the Customs Union because of the Karabakh problem.