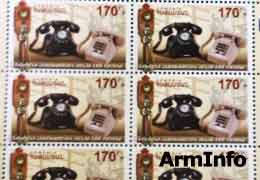 On the 10th of December, 2013, Haypost issued a stamp dedicated to the 100th anniversary of the telephone network in Yerevan, the official website of Haypost says. The first telephone exchange was put into operation in Yerevan in 1913 with the possibility of 200 phone numbers, with 71 subscribers making use of it. The first international telephone lines Alexandrapol- Yerevan, Alexandrapol -Kars were run in 1914. This system remained till 1920. Armenian telephone line developed especially in the postwar years.

The first automatic telephone exchange (ATE) with 6 thousand telephone numbers was put into operation in 1948.

The stamp represents a phone of the 1930s, a "Telefonegyar RT Budapest'' phone and a phone of the 80s on the background of telephone poles and telephone wires lineman.  "ArmenTel" CJSC, Yerevan History Museum and the Museum of Communication provided substantial support for the establishment of the stamp.

The nominal value of the stamp 170 AMD, the designers are Tatevik Yesayan and Vahagn Mkrtchyan.  The stamp was printed at Cartor Printing House, France, and the print run is 40,000.