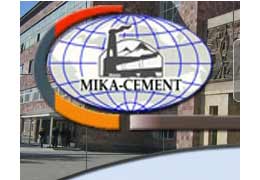 Mika Cement has produced the necessary volume of cement for sales after resumption of production in September 2014 and has been suspended for annual technical activities, the Company's press-service told ArmInfo.

The plant will resume production in Feb 2015 before the start of the construction season in Armenia.
"The company repaid the biggest part of the arrears of wages to workers. In the period of the plant's suspension, the workers will be receiving salary in line with the legislation of the Republic of Armenia," the company's press-service said.

Earlier,  Director of the plant, Naira Martirosyan, told Arminfo the plant  will produce  100,000 tons of cement till the end of 2014. She said that the production was resumed at the end of September when all the main debts were paid off. "We paid off the main debts on salary and electric power and at present we have been paying off the current debts", - she said.   A total of 410 people have been employed at the plant. The production of the plant is sold at the local market. However, the company is going to export its production to  Georgia and Russia, if the prices are competitive. Martorisyan also added that they are going to expand production and to raise its quality.

To note, the production volumes of "Mika cement" started decreasing in 2009 after the global economic crisis. So, in 2011 "Mika cement" produced about 120-130 tons of cement, although before the crisis in 2008 the production volume was 375 thsd tons.  To note, businessman Mikhail Bagdasarov is a former owner of the plant. The property of "Mika Cement" was pawned for the credit debt to VTB Bank (Armenia). "Mika Cement" did not publish its financial report for 2013. But we can see from the previous reports that the debt of the enterprise was growing for the last years. So, in 2012 the loss of the company was more than 2,3 billion AMD versus 22 million AMD in 2011 and 19 million AMD in 2010 and 5,6 million AMD in 2009.