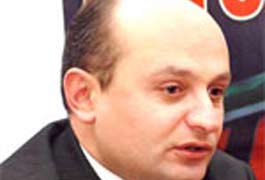 The incident with satirist Vardan Petrosyan has demonstrated all the flaws in the law-enforcement system of Armenia, Ara Khzmalyan, Head of the National Theatrical Creative Association of Armenia, said at today's press conference in Yerevan.

He thinks that Armenia's legislation is too harsh and has a punitive function. "The fact that the Criminal Code of Armenia lacks home arrest as an alternative measure of restraint was a big surprise to me", Khzmalyan stressed. He said that the Armenian public will not put up with the flaws in the legislation and has already started fighting for the change of the measure of restraint against Vardan Petrosyan. He added that a petition has been launched and nearly 80 intellectuals and 3,000 regular citizens have already joined it.

Heritage Party Secretary General Stepan Safaryan, in turn, thinks that Petrosyan's case is controlled by a few people. However, Safaryan refused to specify their names. "The judicial system of Armenia is independent of justice, not the authorities", he stressed.

To note, on October 20 two cars collided on the Yeghvard-Yerevan highway, killing two young men and injuring 5. Vardan Petrosyan was among the injured. He underwent surgery and was discharged from hospital on November 3. Petrosyan was arrested on November 9. His lawyer says that he was neither drunk nor asleep during the accident and that he did not exceed the speed limit as some media outlets say.

In addition, Vardan Petrosyan himself says that he is not going to evade responsibility, so, his supporters think that Petrosyan may just as well be released on his own recognizance.