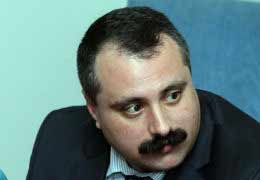 "I strongly agree with the statement by Kazakh President Nursultan Nazabayev saying that Armenia must join the Eurasian Economic Union (EAU) within the borders it joined WTO," Spokesperson of NKR Foreign Ministry David Babayan told ArmInfo.  According to Babayan, Armenia is a sovereign state participating in political and economic projects and it must integrate into projects within its borders. He does not understand why should Nazarbayev's statement arouse such hot debates in the Armenian public.

"The Nagorno Karabakg Republic and the Republic of Armenia are two independent and sovereign states, why should Armenia integrate into any structure together with NKR? In his speech Nazarbayev said that Armenia must join the EAU within the same borders it joined WTO. Nothing threatened NKR when Armenia accessed WTO. I think, nothing will threaten NKR also when Armenia accesses EAU," Babayan said.

As for possible opening of border crossings between Armenia and NKR, Babayan thinks it unlikely.