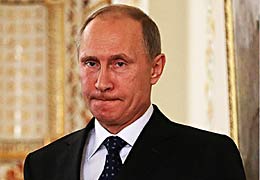 Eubusiness.com quotes Putin as saying, "Government representatives of the troika (Russia, Kazakhstan and Belarus) ... have developed the draft of the institutional part of the Eurasian Economic Union agreement". "This document determines the international legal status, organisational frameworks, the objectives and mechanisms of how the union will operate starting on January 1, 2015," Putin said.

The document determines the basic principles of the Union's activity: cooperation on the mutually beneficial basis, harmonious development of economies and enhancement of competitiveness.

"We are setting up the Eurasian Economic Union to strengthen the national economies, secure their harmonious development and rapprochement, which in the end is aimed at the enhancement of the wellbeing and living standards of people," Putin said.

The second stage is to coordinate the functional part of the Agreement. "The text should be ready for signing on 1 May 2014. Then the Agreement will be submitted to our countries' Parliaments for ratification so that the Eurasian Economic Union could start operating in full format starting 1 Jan 2015. It is important to follow the schedule. For that purpose it is necessary to promote the cooperation between our ministries and expert groups", he said.