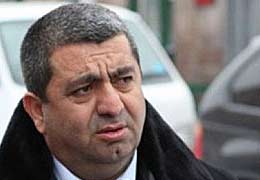 Police have released Arshak Svazyan, the man suspected of beating oppositionist MP Aram Manukyan, on pledge not to leave the city, the Investigation Committee told ArmInfo.

It is widely rumored by local media outlets that Svazyan is the former driver of Arakel Movsisyan (Shmays), MP from Republican Party of Armenia.  Meanwhile, Movsisyan denies these reports and swears that he bears no relation to the attack on Manukyan.

Yerevan Police detained Arshak Svazyan (born in 1973) suspected of beating Aram Manukyan on 15 December. MP Aram Manukyan was beaten up in front of his home entrance in the evening on 11 December. ANC representatives claim that the authorities are behind the incident.