Ruben Hakobyan: Armenian parliament must and can stop the outrage in Armenia 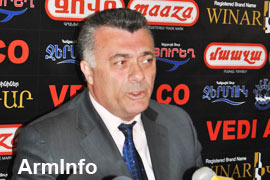 "National Assembly of Armenia must and can stop this complete outrage in Armenia," Ruben Hakobyan, head of the Heritage Party Faction in the Parliament, told ArmInfo.

Today, the opposition parties Heritage, Prosperous Armenia, and Armenian National Congress, boycotted the Parliament's meeting and demanded a different agenda to discuss the latest incidents. The Parliamentary majority rejected the demand, but agreed to convene later to discuss the issue.  Hakobyan said the issue must be discussed before the main agenda.

"Parliament does not assume the role of a judge, of course, but having the people's mandate we must express our exact stand on the situation," Hakobyan said.

Asked who is behind the attack on oppositionist MP Aram Manukyan, Hakobyan said he observes the presumption of innocence and will not make any untimely statements.

The unknown burned cars of four oppositionists lately, beaten up three Artsakh War veterans who harshly criticized the authorities, and attacked oppositionist parliamentarian Aram Manukyan and later his comrade Ashot Piliposyan. All these people claim that the authorities are behind those incidents.  On 14 December, the Police detained Arshak Svazyan (born in 1973) suspected of beating Aram Manukyan. It is widely rumored by local media outlets that Svazyan is the former driver of Arakel Movsisyan (Shmays), MP from Republican Party of Armenia.  Meanwhile, Movsisyan denies these reports and swears that he bears no relation to the attack on Manukyan.