Expert: The link USA-Turkey-Israel is the key threat to Armenia's security 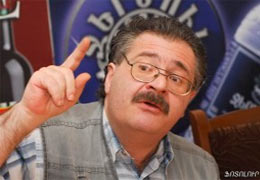 The link USA-Turkey-Israel is the key threat to Armenia's security, political expert, Sergey Shakaryants, said at today's press-conference. He also added that just the above mentioned "three" is trying at present at any cost to level significance and influence of the events dedicated to the 100th anniversary of the Armenian genocide.

'And the statement by Israel's foreign minister, that Israel does not recognize the Armenian genocide, was not accidental. If Tel-Aviv makes such sharp anti-Armenian statements, it expresses not only its own position, but also the position of its key sponsor and strategical partner - Washington. These two countries are not going to recognize the genocide, as it is not beneficial to them", - Shakaryants said.

He also added that he will not be surprised if the leadership of the USA as well as the leaders of the other Western countries will not arrive in Armenia to take part in the memorial events, but will visit Turkey to celebrate the so-called "Gallipoli victory".

The expert thinks that the rumors on worsening of relations between Tel-Aviv and Ankara are a myth, as a true level and quality of relations is determined not by the diplomatic rhetoric, but economic cooperation. "Look, what huge investments Israel is making in the Turkish economy, agriculture, defense industry and many other key sectors. Against the background of such a close cooperation, all the rest political statements simply lose their relevance", - the expert said.

To recall, the 100th anniversary of the Armenian genocide will be marked on 24 April 2015. Official Ankara does not recognize the genocide which was recognized in 24 countries of the world. There are no diplomatic relations between Armenia and Turkey and the 330 km long border between these countries has been  shut down since 1993 according to Ankara's initiative.