RPA Vice Chairman: Eurasian Union needs Armenia as much as Armenia needs the given project 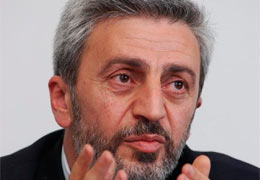 No politician or statesman in Armenia will agree with such an absurd idea of opening a customs point between Armenia and Nagorno Karabakh Republic, Armen Ashotyan, Vice Chairman of the Republican Party of Armenia, Minister of Education and Science, told reporters when asked about the fate of Artsakh if Armenia accesses the Eurasian Economic Union (EAU).

According to Ashotyan, Armenia and Artsakh are two countries with a single economic, education, culture, and what is the most important, defense area. Armenia is the guarantor of Artsakh's security.  As for the Thursday statement by Kazakh President Nursultan Nazarbayev on Ilham Aliyev's letter, Ashotyan compared the Azerbaijani president with an annoying neighbor that is always discontented at something and constantly interferes into others' affairs, asks something, and has already bored everyone.

"It is obvious that the Azerbaijani authorities show jealousy of Armenia's Eurasian integration. They realize the results of Yerevan's choice and the benefits Armenia will have from that. If Armenia chose a dead-end road, Baku would not take Yerevan's actions so painfully. Baku's nervous response confirms that they have assessed the consequences of our country's Eurasian choice," Ashotyan said.  As regards Kazakh President Nazarbayev's statement, Ashotyan said Baku and Astana develop close cooperation, first of all, in the gas sector. This circumstance explains Nazarbayev's unwillingness to see Armenia in the EAU.

On the other hand, he said, the EAU needs Armenia as much as Armenia needs that project. Armenia as a South Caucasus country is an irreplaceable partner for the EAU from the viewpoint of geopolitics.  "Without Armenia, the new Union's borders will be laid through the North Caucasus only. Meanwhile, Armenia's participation will allow expanding the structure to the south, up to the Middle East and Western Asia," Ashotyan said.