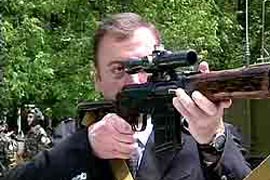 President of Azerbaijan Ilham Aliyev made a speech at the 23rd Session of the OSCE PA in Baku on 28 June, wherein he told the same old story about "the occupied Azerbaijani lands" and complained for "the selective approach" to implementation of provisions of the International Law, Trend reports.

"Unfortunately, we have faced selective approach. And this is the issue which is of great concern of the Azerbaijani people. We see that some resolutions of the United Nations Security Council are implemented within hours, while some resolutions remain on paper for 20 years as in the case with Azerbaijan:.  OSCE decisions, particularly decisions of Lisbon Summit, which clearly identify what steps should be taken in order to resolve this conflict, also remain on paper. The European Parliament, Parliamentary Assembly of Council of Europe, Organization of Islamic Cooperation, Non-Alignment Movement and other organizations adopted decisions and resolutions. But Armenia simply ignores them. They do not want to liberate the territory, which does not belong to them. They want to keep everything unchanged," Aliyev complained.

He recalled the statements by the presidents of the OSCE Minsk Group бo-chair-countries saying that the status-quo is not acceptable.