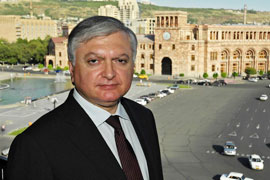 The situation in Syria is very complicate and cannot be called black and white, Edward Nalbandian, Foreign Minister of Armenia said at the PACE Bureau Meeting in Yerevan, Friday.

The minister said that Syrian President Bashar Assad enlisted the support of a part of his citizens a year ago, and the political views of the given part of Syrians cannot be ignored.

"Many Syrians refuse to support the opposition, as they are not sure what will happen when the opposition comes to power. We support Assad as he supposed us," the minister said.

The minister said that there is a big Armenian community in Syria and the official Yerevan is seriously concerned over the situation in that country. In this light, Nalbandian said, 10,000 Syrian Armenians have already arrived in Armenia.

Edward Nalbandian said it is necessary to seek peace for Syria and do it at the second Geneva Conference.

"The first Geneva Conference proved fruitless, as Iran and Saudi Arabia were not involved in it," the minister said.